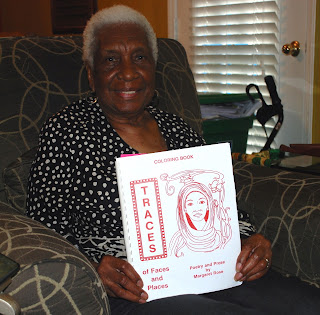 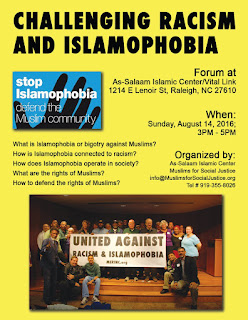 Raleigh Muslim Community to hold a Forum on Islamophobia & Racism
As Salam Islamic Center and Muslims for Social Justice will host a forum on Islamophobia & Racism on Sunday August 14, 2016 from 3pm – 5pm at the 1214 E. Lenoir Street, Raleigh NC, 27610
Raleigh, North Carolina – Sunday, August 07, 2016- "Challenging Islamophobia and Racism"
Islam and Muslims have been under the intense scrutiny of the government, the media, and the Western Society since the 9/11 tragedy. Many peaceful law abiding Muslims locally and around the United States have been the victims of discrimination, verbal insults, and violence.

According to the FBI's Uniform Crime Reports program. Prior to the 9/11 attacks, the program typically recorded between 20 and 30 anti-Muslim hate crimes per year. But in 2001 that number rose more than tenfold to nearly 500. In the years since, annual hate crimes against Muslims have consistently hovered in the 100-150 range, roughly five times higher than the pre-9/11 rate.

In 2015, more than 70 acts of damage, destruction, vandalism and intimidation against Muslims houses of worship.
4 out of 10 Americans have an unfavorable view of Islam.
44% of Americans said they believe that some curtailment of civil liberties is necessary for Muslim Americans.
26% think that mosques should be closely monitored by U.S. law enforcement agencies.
29% agreed that undercover law enforcement agents should keep tabs on Muslim activities and fund raising by infiltrating their civic and volunteer organizations.
Source: Islamophobia – CAIR.com

As Salaam Islamic Center and Muslims for Social Justice are cosponsoring this forum to give Muslims in Raleigh, NC an opportunity to discuss, and share their concerns with other community members

A forum will be organized at As-Salaam Islamic Center to explore the roots of Islamophobia or anti-Muslim bigotry. This forum will explore the following questions:

How does Islamophobia operate in the society?
What are the links between Islamophobia and racism?
How to bridge gap between immigrant and African American Muslims?
How can Muslims defeat racism and Islamophobia?

This forum is free and open for all. Snacks will be provided. Email at info@muslimsforsocialjustice.org or call 919-355-8026 for more questions.