Muslims for Social Justice Condemns Massacre of Christians in Pakistan 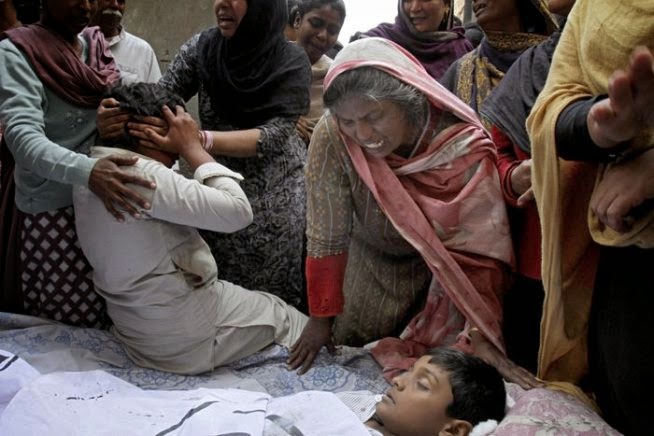 "A Pakistani Christian family mourn over the lifeless body of a boy who was killed from the suicide bombing in Lahore on Sunday. (Source: AP)"


Muslims for Social Justice condemns massacre of Christians in Lahore, Pakistan, where fourteen people were killed and 78 injured in two suicide bomb attacks on churches on March 15, 2015 (1). Earlier, on November 7, 2014, a Christian couple working at a brick kiln were burnt alive by a mob over alleged blasphemy charges. Many believe the couple was killed as a result of a wage dispute (2). Brick kiln industry in Pakistan is notorious for using slave-like bonded labor (3). Christians in Pakistan are one of the poorest segments of the society and face increasing violence from majority Muslim community. Pakistani Christians are victims of a defacto caste-system where they have been reduced to second-class citizens. Generations of Christian Pakistanis have been relegated to low-paying positions, a condition similar to low-caste Hindus in India.

Many Christian and other minorities in Pakistan have been persecuted by Pakistan's blasphemy law. Even an unverified accusation can lead to assault against an entire community. Pakistan's blasphemy law was borrowed from the British colonial law in 1860 (4). This law was modified and expanded in its scope by the Pakistani military dictator and U.S. ally General Zia-ul-Haq (5). Gen Haq received billions of dollars in the U.S. support during the Afghan Jihad. Gen. Haq promoted the specter of religious extremism in Pakistan and introduced some of the most draconian laws against women and minorities (6). Muslim scholars, including Maulana Wahiduddin Khan, have considered Pakistan's Blasphemy Law as un-Islamic (7). Many non-Muslims and even Muslims are put behind bars or murdered by an angry mob over alleged blasphemy. It is inconceivable that religious minorities, who live in a climate of fear in Pakistan, would commit such an act. Evidence suggests that many alleged perpetrators of blasphemy were framed for economic or political gains (8). There are also allegations that riots against alleged blasphemers have been orchestrated by well-positioned politicians and land-grab mafia in Pakistan (9).

While Muslims for Social Justice's does not support abusive or incendiary language toward any religion, especially the sort witnessed in the form of anti-Islam cartoons published by the European papers, we strongly condemn policies that promote and justify violent attacks on people and communities.

Muslims for Social Justice believes that the best response to religious extremism within the Muslim world is through progressive Muslim grassroots movements that oppose all acts of social injustice violation of human rights. We oppose any Western military solutions to religious extremism as it continues the colonial legacies of Western control over the nations, the bankrupt idea that the West, the U.S. in particular has of itself as the world's cop. Past military actions by the USA. have in fact led to the rise of extremism in the Muslim world (10). We especially highlight USA's role in promoting violent extremism in Pakistan through publishing violent textbooks in ethnic Pashto and Dari languages. These textbooks have become a staple in the hand of the extremists in Pakistan and Afghanistan (11).

Muslims for Social Justice believes in human rights for all irrespective of class, race, ethnicity, religion, gender or sexuality. We urge Muslims and especially Pakistanis to stand up against oppression against minorities in Pakistan. We stand in solidarity with all grassroots organizations in Pakistan, who are fighting for the rights of the marginalized in Pakistan.

7) ""If a campaign were to be carried out on all the electronic media explaining exactly what the blasphemy laws are, the fact that vigilantes have murdered other people due to political, economic or other rivalries and motives, people would not favour it," says veteran journalist and human rights campaigner Beena Sarwar."
http://www.theguardian.com/commentisfree/2011/feb/03/pakistan-blasphemy-laws-taliban

8) "The Badami Bagh incident, however, has its own set of local complications — including, it seems, the politics of a local steel-traders’ elections. Beset on several fronts, the Christians also fear that there may be forces trying to force them out in order to grab their property."
http://world.time.com/2013/03/11/the-anatomy-of-an-attack-on-a-christian-village-in-pakistan/

9) "Just as Charlie Hebdo has the right to publish, we have the right to peacefully challenge negative portrayals of our religious figures," said CAIR National Executive Director Nihad Awad. "The answer to speech one disagrees with should not be violence, but should instead be more speech promoting tolerance and mutual understanding."
http://www.cair.com/press-center/press-releases/12809-cair-to-react-to-new-charlie-hebdo-cover.html

11) The Taliban indoctrinates kids with jihadist textbooks paid for by the U.S.


http://www.washingtonpost.com/blogs/worldviews/wp/2014/12/08/the-taliban-indoctrinates-kids-with-jihadist-textbooks-paid-for-by-the-u-s/
at 11:57 PM No comments: