When David Horotwitz was invited by UNC College Republicans to speak at the University of North Carolina at Chapel Hill just two months after the murders of three Muslim youth in Chapel Hill, it caused alarm among the Muslim community and their allies at UNC and the greater Triangle area. Mr. Horowtiz has been documented as a prominent Islamophobic speaker in the USA by SouthernPoverty Law Center and The Center for American Progress. During his speech at the UNC, Mr. Horotwitz characterized Arabs as racist, linked student organizations Muslim Students Association (MSA) and Students for Justice in Palestine (SJP) to terrorism, and implied Palestinians should be attacked with nuclear weapons.

Muslims are living in an environment of extreme demonizing and dehumanizing by American media. Hatred against Muslims is further promoted by a well-funded Islamophobia network as identified in a report “Fear Inc.” by The Center for American Progress. Fanning Islamophobia has serious consequences on the well being of people. Many Muslims and even people who appear as Muslims have been murdered by people who later confessed to killing “Muslim” as a revenge against “terrorism”. During February and March 2015, Washington based Council on American Islamic Relations (CAIR) documented multiple Islamophobic attacks, ranging from graffiti at an Illinois school “All Islam will be killed in this school” “F*** Arabs”, “Kill all the Arabs”; notes left in public in Revere, MA, saying "We must kill all Muslims in America"; and a high school in Washington State being vandalized with graffiti "Muslims get out" and a Hindu temple in the same town vandalized with Nazi Swastika and "Get out" sign. A mosque was burned to ground in Houston, TX, on February 12, 2015, in an alleged Islamophobic attack. A retired Houston firefighter tweeted “Let it burn...block the fire hydrant”.

In the context of rising Islamophobia in the country and the murders of three Muslim youth in Chapel Hill, Horowitz's speech added insult to injury. His talk at UNC has mobilized Muslims students in Chapel Hill and their allies to launch #NotSafeUNC campaign. UNC students have shared stories such as, UNC faculty's insensitivity toward Muslim students psychological trauma in the wake of Chapel Hill tragedy, or UNC security guard suspecting a Muslim woman for carrying a bomb to the Dean Dome. Farris Barakat, brother of Chapel Hill murder victim Deah Barakat, supported #NotSafeUNC campaign by tweeting that his brother was murdered because "freedom of speech has been used to defame Muslims through lies. Speak up."

A broad movement that challenges all forms of oppression is essential to ending Islamophobia. UNC community organized an action titled “People of Color Takeover ofthe Quad” on April 24, 2015, that mobilized diverse allies – Muslims, Palestinians, African Americans, Asians, LGBT activists, feminists, Triangle area social justice activists and many more. One of the actions included dropping a banner on Saunders Hall to rechristen it “Hurston Hall”, thus changing its name from a KKK leader to the first Black student at UNC as part of the #KickOutTheKKK campaign.

As members of Muslims for Social Justice and a network fighting racism and Islamophobia in North Carolina, we fully support UNC community in their fights against bigotry and oppression. Hatred will win only if demagogues divide us by fear. As a coalition of forces working against all forms of hatred – either based on race, ethnicity, gender, religion or sexual orientation, we will not let the forces of hate prevail. 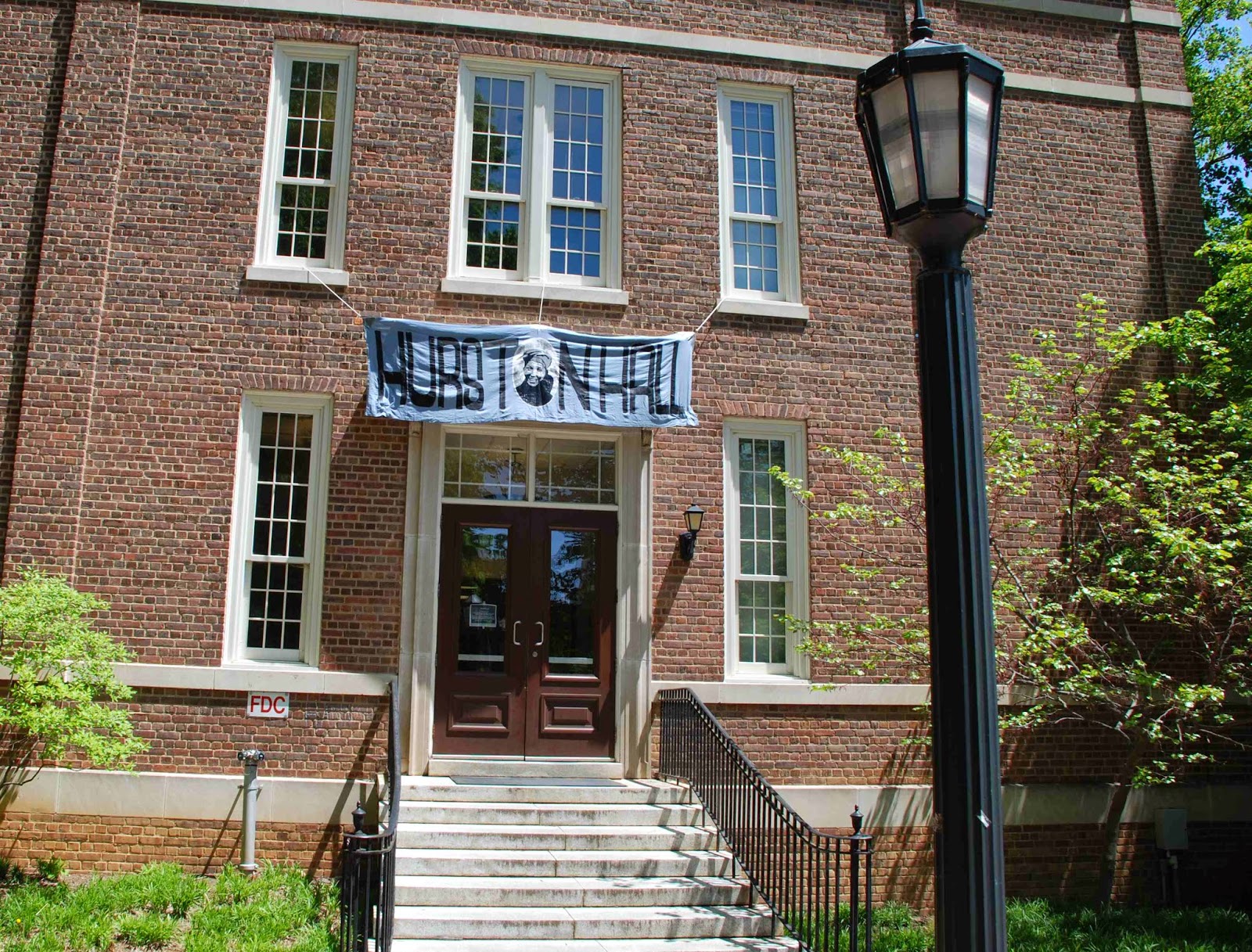 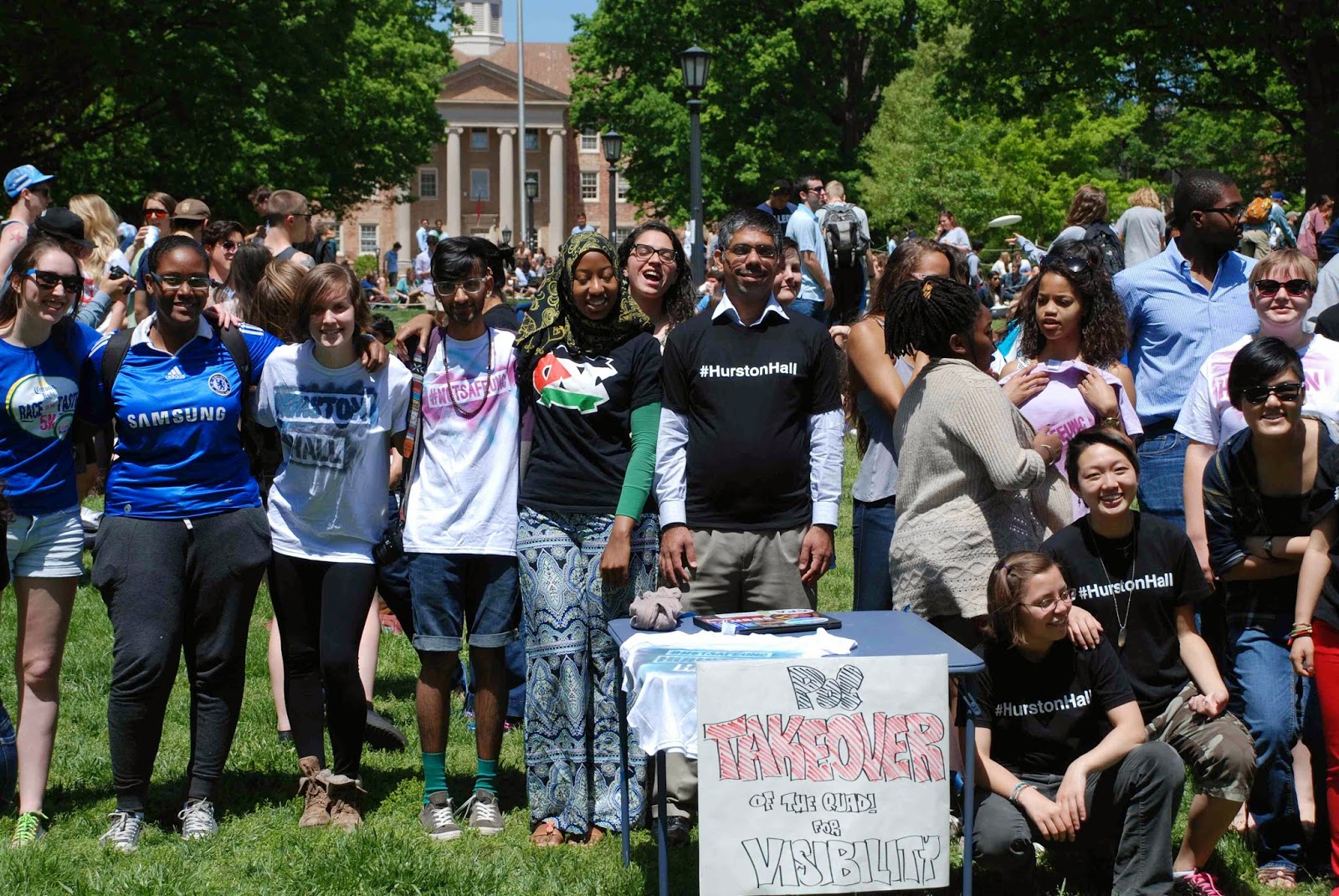 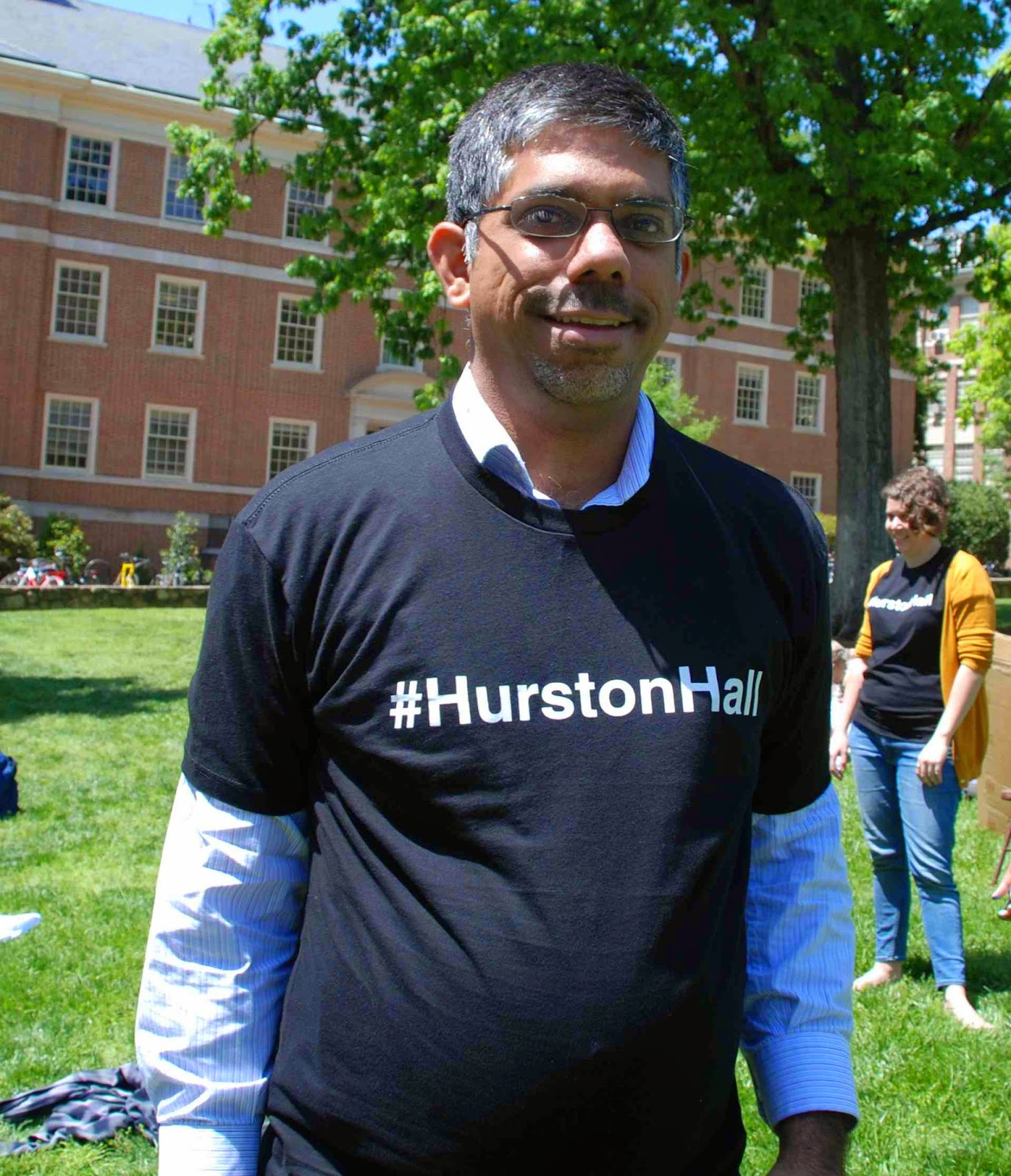 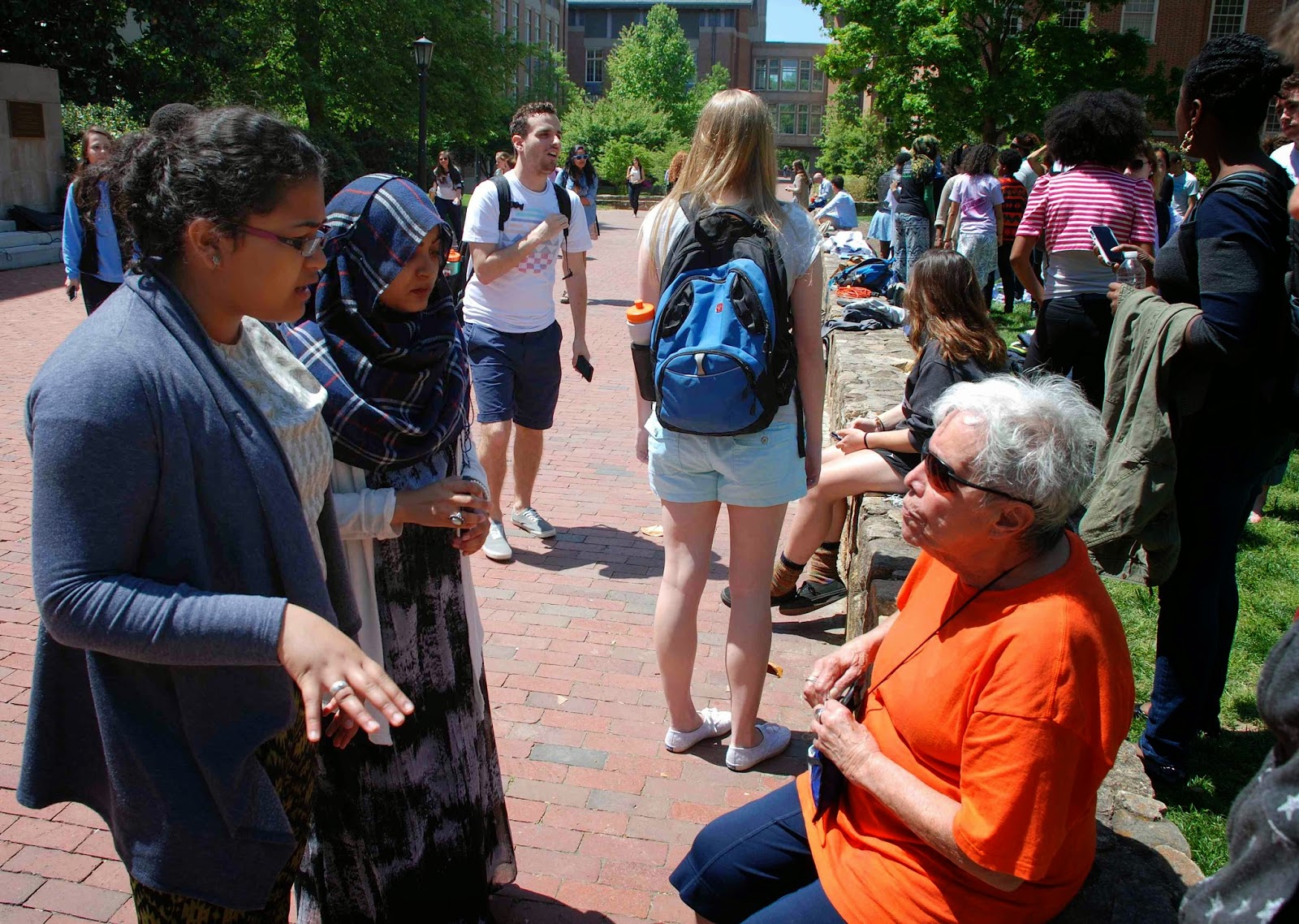 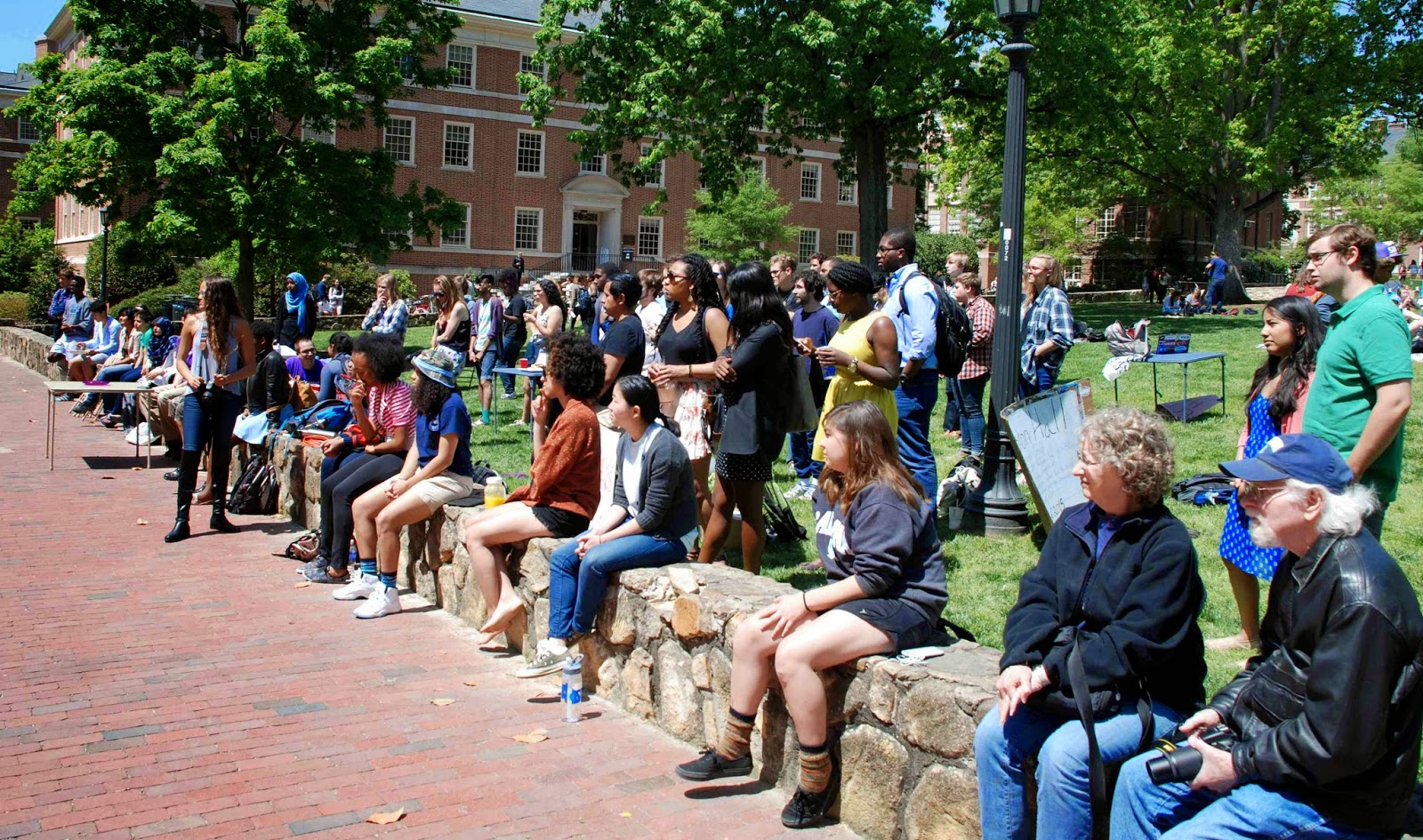 Here are video and pictures from the banquet: 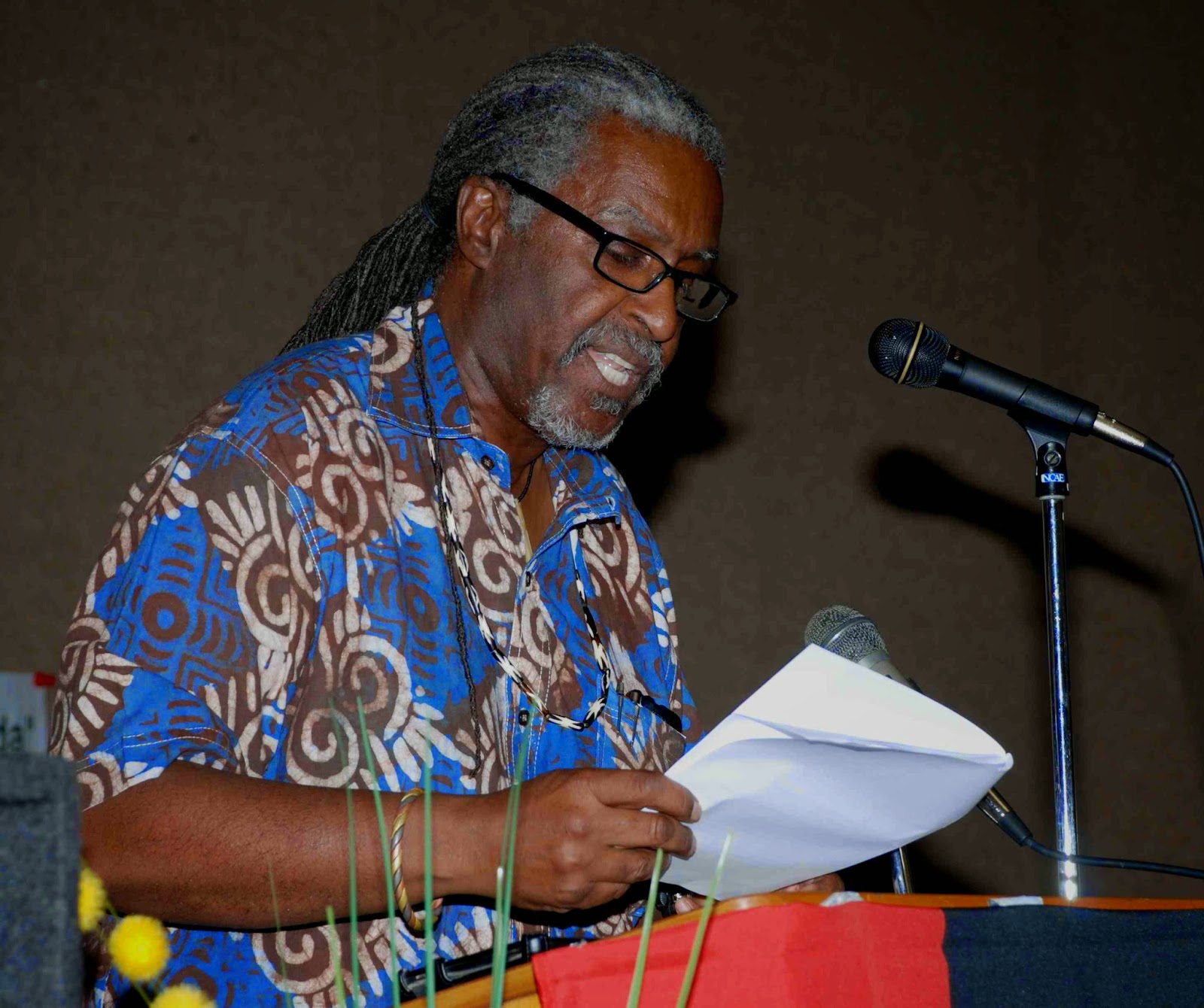 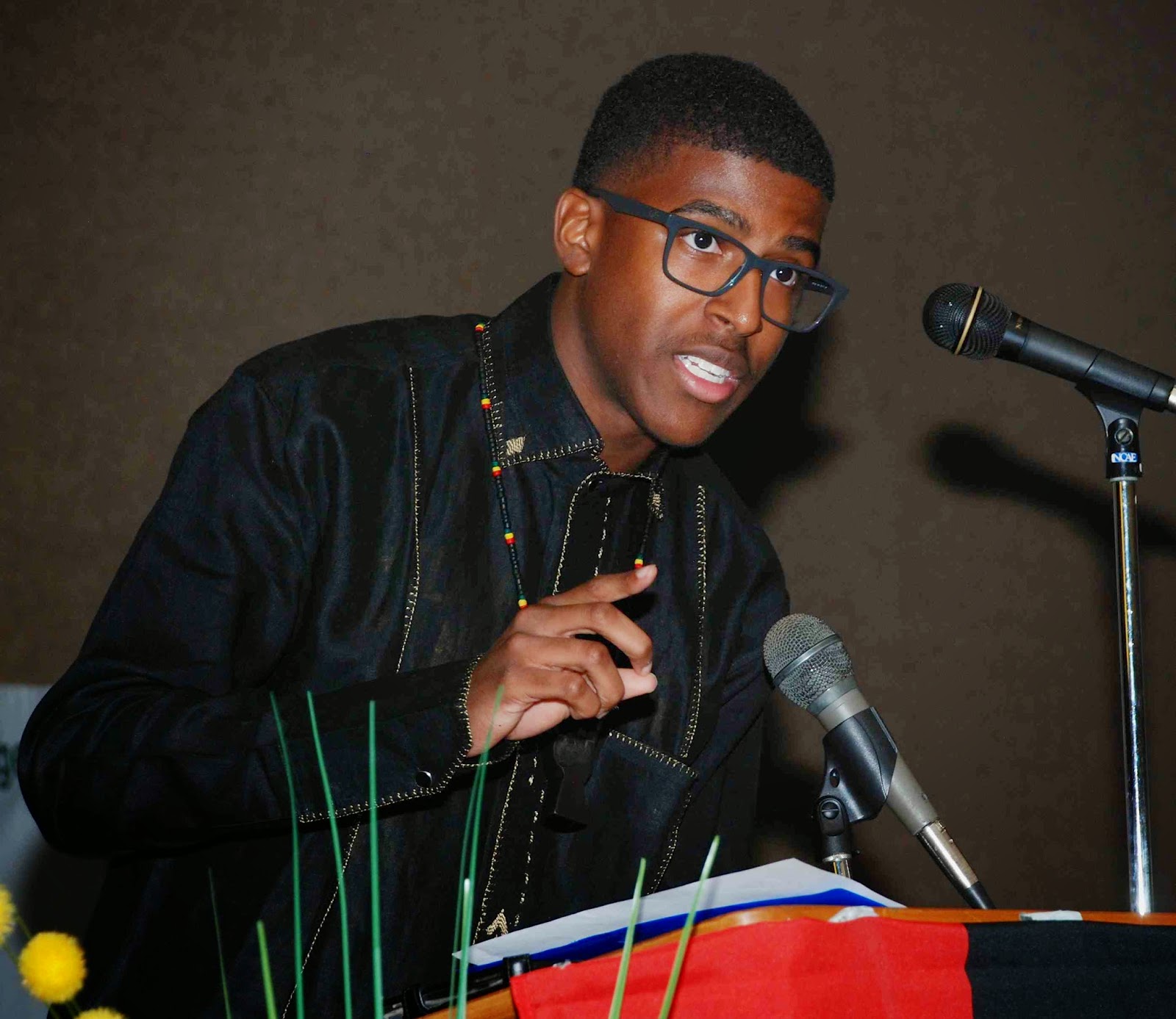 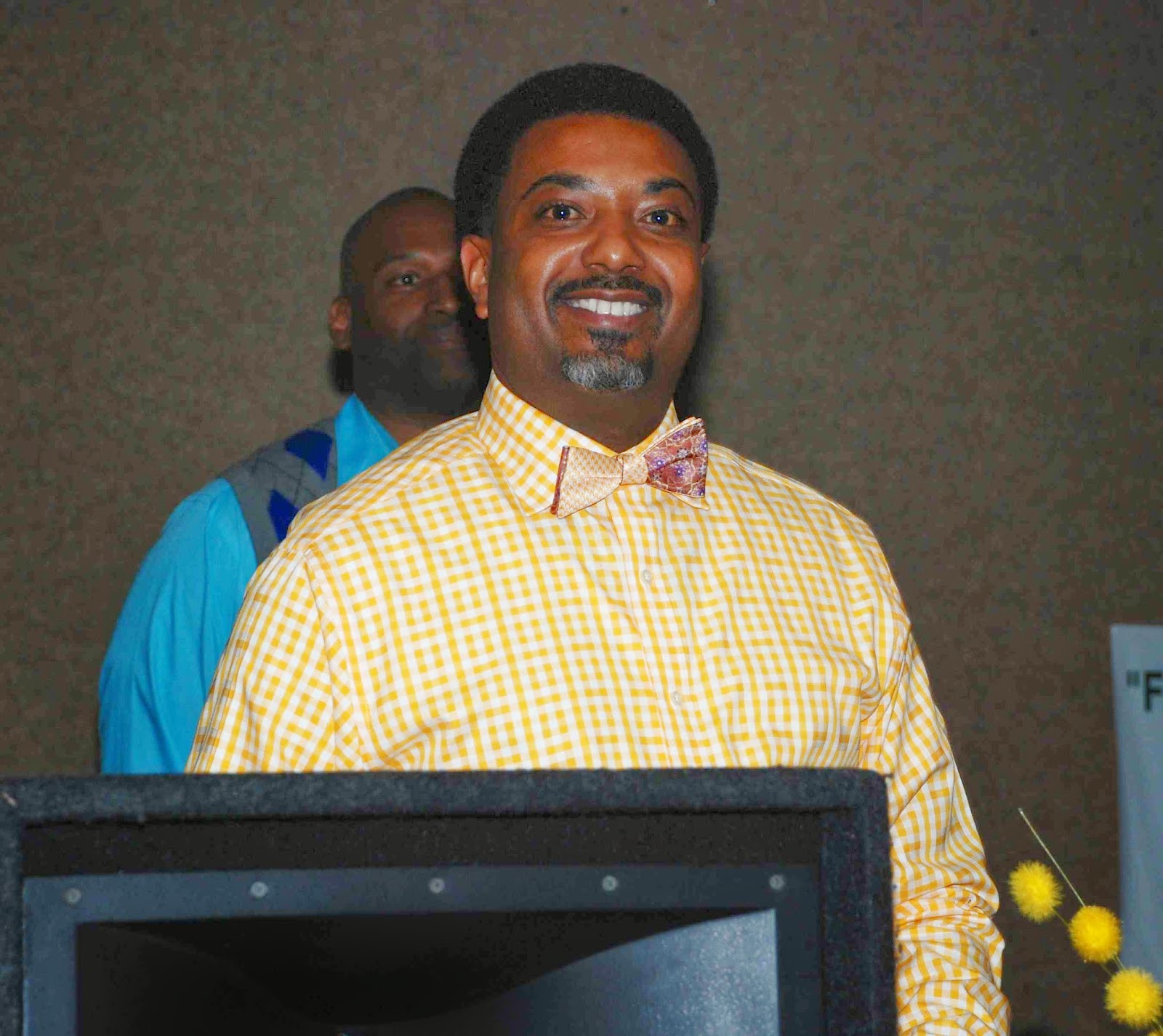 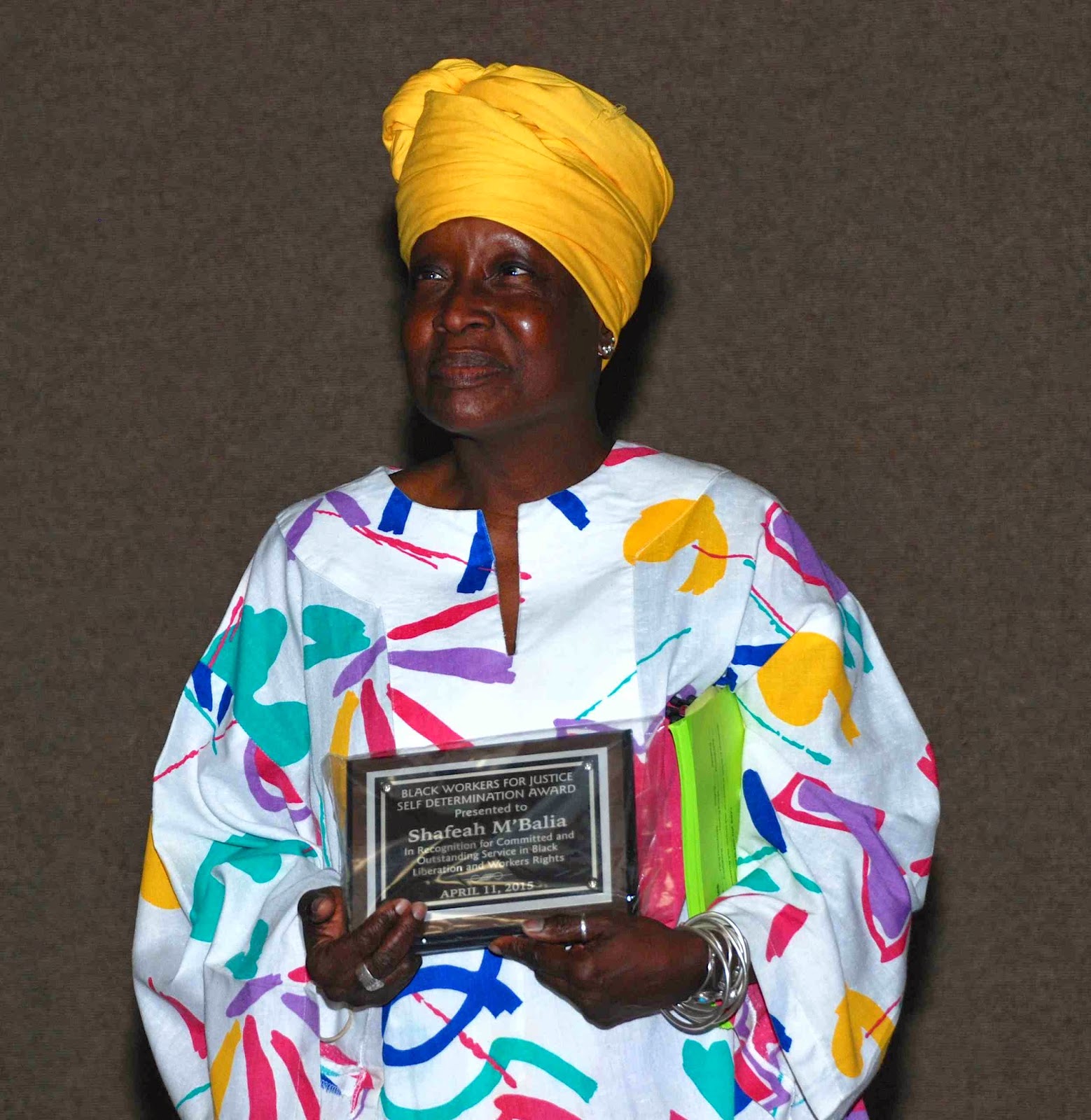 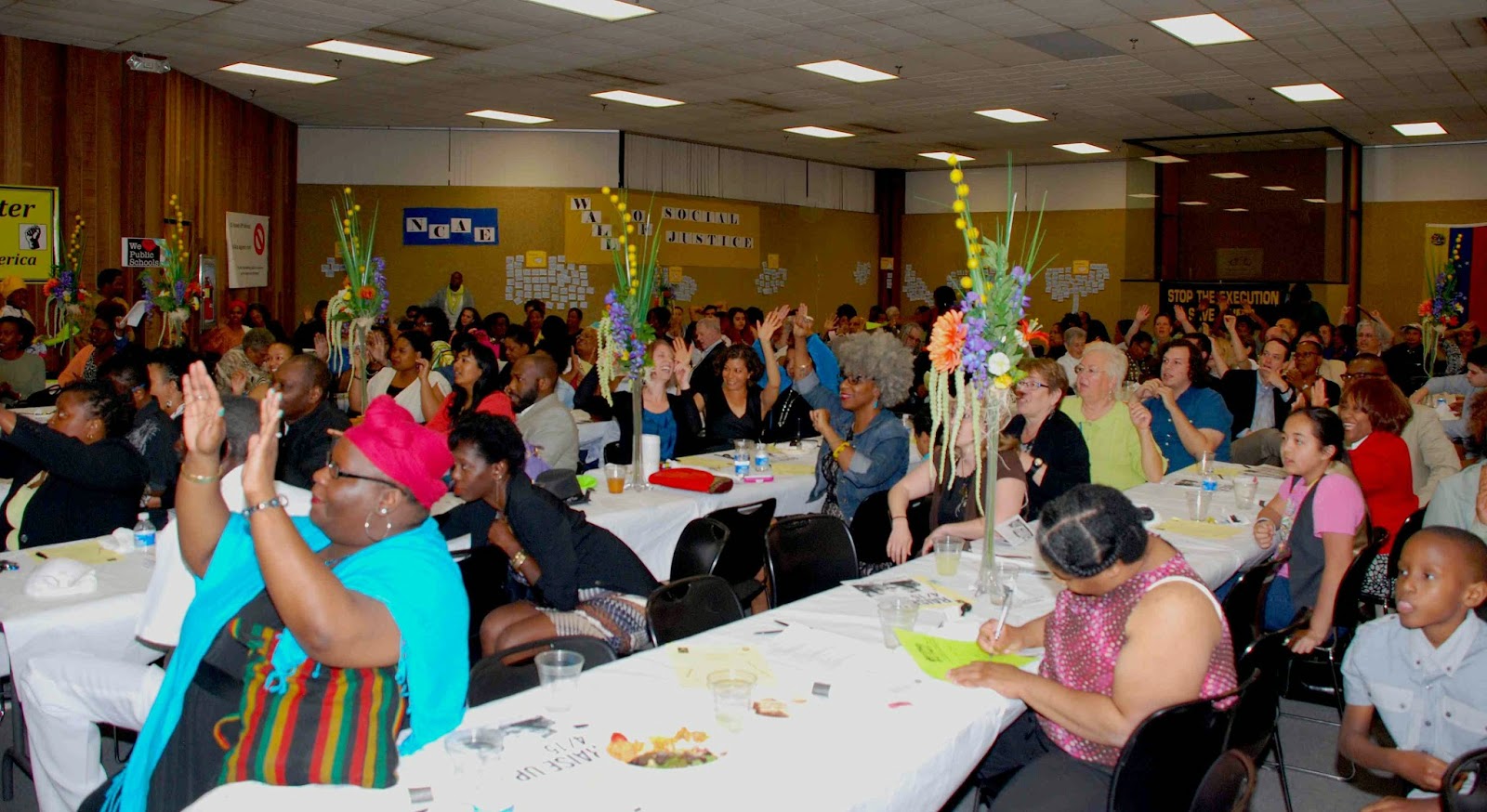 Muslims for Social Justice is proud to sponsor the 32nd Annual Martin Luther King Support for Labor Banquet on this Saturday! This year's banquet will feature Alicia Garza - founding member of Black Lives Matter! Please do attend this incredibly powerful event organized by Black Workers for Justice! Click below to learn more:https://www.facebook.com/events/707989502654552/ 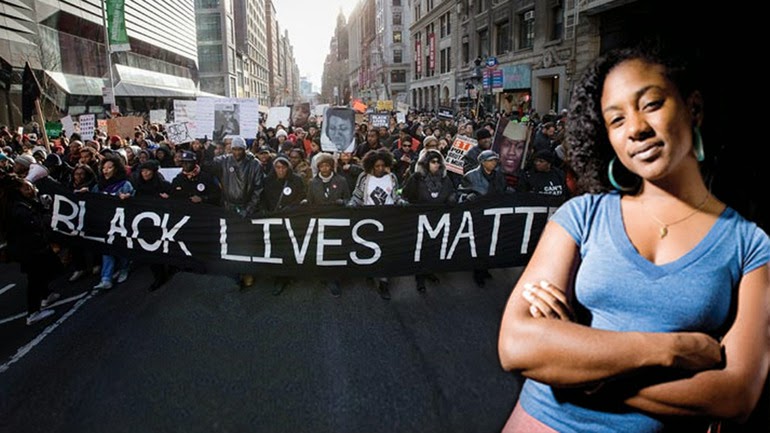