#BlackLivesMatter Action in Durham on 7/21/16

Hundreds of people gathered in front of Durham police headquarters at 6pm on Thursday (7/21) evening. As the crowd grew, the rally took over the intersection (Chapel Hill St and Duke St) blocking the flow of traffic in all directions. Seven Black and POC organizers chained themselves to the railing outside of the police department. Meanwhile, white comrades, connected to one another with lockboxes, blocked Duke St. 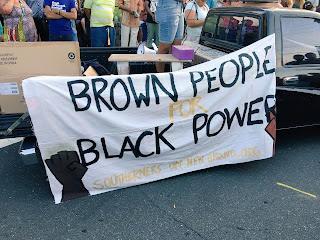 The program featured speakers from a number of organization, including MSJ (thank you to Q for speaking), as well as Black Youth Project 100, Southerners on New Ground (SONG), Workers World Party, Durham Solidarity Center, Showing Up For Racial Justice - Triangle (SURJ), Black Workers for Justice, SpiritHouse, and others. Speakers denounced violence and terror the police systematically inflict against Black people and spoke about the need to re-invest in the welfare of our communities—by prioritizing community needs, first and foremost, and re-directing resources to job programs, affordable housing, education, healthcare, etc. Many recognized that we find ourselves in a moment within the larger movement that is spreading nationwide, and we cannot afford to stay silent. 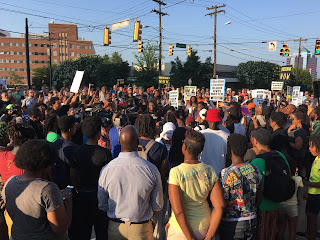 Importantly, many speakers uplifted the names of those killed by police nationwide, as well as here in our state—just this year, Akiel Denkins was killed in Raleigh, Deriante Miller in Kinston, and Jai "Jerry" Williams in Asheville. Their names were lifted up throughout the evening. 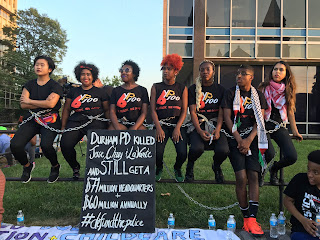 Further, rally organizers paid close attention to the role police plays locally. Annually, the Durham Police Department already receives nearly $60 million of the city budget. The Durham Police Department this year was found to demonstrate alarming racial bias against Black residents in their policing but has not faced any funding restrictions from city officials. Over the past year, Durham Beyond Policing, a local campaign opposing the building of a new police headquarters and demanding investment in Black and Brown community, has called city’s attention to the harm that the police bring to communities of color. 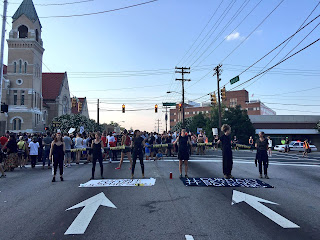 After the larger crowd dispersed, protesters engaging in civil disobedience and their supporters remained at the intersection until midnight, having blocked traffic in all four directions for six hours total. The rally was part of #FreedomNow national day of action, a call for which was issued by the Movement for Black Lives, a national coalition of Black racial justice organizations. 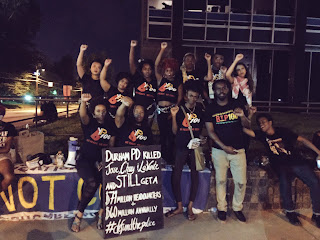