Statement of Solidarity with Duke Sit-In

Muslims for Social Justice stands in solidarity with Duke community who are fighting against racism and attacks on workers at Duke campus. Duke University is built by and operates on the backs of Black and Brown workers who are victims of racism and worker abuse. We commend sit-in by students to expose this historic racism and attacks on workers, including a recent incident where a Black worker was struck by car and allegedly verbally assaulted with "N" word by Duke's Executive Vice President Tallman Trask. We demand justice for this racist, anti-worker attack! We also support Duke community's demand that minimum wage at Duke University should be raised to $15. All workers deserve living wage for their labor! We demand amnesty for students who are part of the sit-in campaign. We join hands with justice loving community at Duke University and beyond to abolish white supremacy, economic exploitation and all forms of oppression. 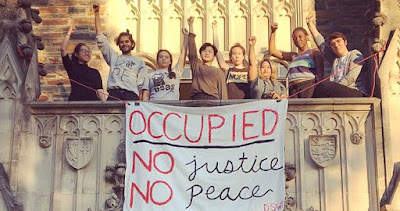