Forces of Peace and Justice Respond to KKK

(This article was originally published by Imagine 2050 blog).

Soon after the 2016 election, the Loyal White Knights, a Ku Klux Klan chapter in the rural town Pelham, NC, announced a rally in North Carolina to celebrate Donald Trump’s victory. They decided the victory parade would take place on December 3rd in North Carolina, but did not announce the exact location.

Witness to the increased demonizing and dehumanizing of Muslims, immigrants, women, disabled, working people and other marginalized communities and alarmed by the spike in hate crimes across the country, people throughout North Carolina came together in response to this rally and to protect each other and build their unity.

A coalition of 20 organizations, the Triangle Unity May Day Coalition, organized the anti-KKK rally in Raleigh, NC, held on the same day of the KKK rally.  This action was led by Black, Brown, Muslim, workers and others, most impacted by hatred and bigotry. 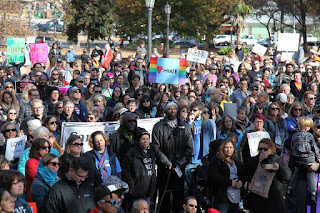 The rally brought together more than 1,000 people on a bitter cold day. Speakers represented such grassroots organizations like Black Workers for Justice, UE Local 150, Muslims for Social Justice, Movement to End Racism and Islamophobia, Fight for $15, Organize 2020, Durham Artists Movement and many others. Allies from Jewish Voice for Peace – Triangle, Carolina Jews for Justice and Triangle SURJ (Showing Up for Racial Justice) also spoke at the rally. 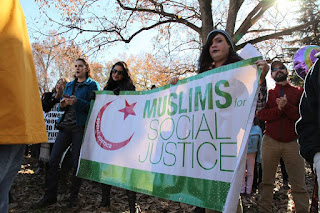 This rally rejuvenated peace and justice-loving folks in North Carolina. There was a resolve to build a stronger intersectional movement, especially during the next four years of the Trump administration. Participants agreed that we cannot afford to simply have spontaneous actions in response to a crisis, but need to channel the energy exhibited during the anti-KKK rally into efforts to build an long-term movement. 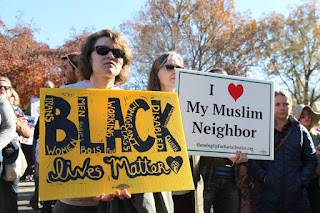 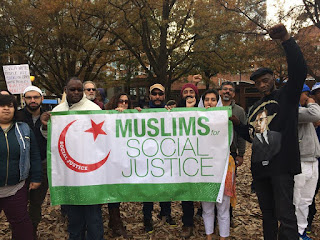 Based on this recognition, a long-term grassroots coalition, called Triangle People’s Assembly, was launched on the following day in Raleigh, NC. Many participants from Saturday’s anti-KKK actions throughout the state attended the People’s Assembly. Participants discussed lessons from the anti-KKK rally and explored future organizing questions.  Several people expressed the need to learn more about anti-Muslim bigotry and how to become effective allies to the impacted communities.

The movement against anti-Muslim bigotry, racism and all forms of oppression will be a long and often an arduous journey. Many hope that the anti-KKK rally and subsequent launch of the Triangle People’s Assembly will provide the support and tools for that journey in North Carolina.